When man rebelled against their Bore (the Divine Creator) and where put out of the Gan Eden, it looked like there would be no hope for man who had to face death at the end of a life with many problems and much pain.

When Moshe was on a mountain talking to the Most High he asked the elohim what he could say to the people. The Most High Elohim replied enigmatically, in a phrase that occurs nowhere else in Tanakh:

Eh-heh-yeh ashair Ehheh- yeh ("I will be what I will be" often translated as: I Am Who I Am)

The phrase means, literally, “I will be what I will be,” or more fundamentally that God His set apart Name belongs to the future tense. His call is to that which is not yet. If we fail to understand this, we will miss the very thing that makes Judaism unique.

Consider the structure of biblical narrative. In literature there are many kinds of narrative but they all have one thing in common, what Frank Kermode called

“the sense of an ending.”

They reach closure. Some end with “they all lived happily ever after.” We call these fairy tales. Others end in death and defeat. We call them tragedies. There are other types, but they all have a beginning and an end. That’s what makes them stories.

In our society we do have lots of stories which are given from one generation to an other. We all grow up with those oral stories and oral tradition. In many of them we hear about a future. Constantly it seems that we are directed to a future. The navi is there to tell us about things which are going to happen later. Every time there were generations who came to hear about things to happen in the future, but they also came to see that things said long before  had become a reality. As such our people came to understand that each Dvar HaElohim (Word of God) is a given Word that becomes reality.

Jonathan Sacks asks us to consider Genesis and Exodus

The Jewish story begins with God’s call to Abraham to leave his land, his birthplace and his father’s house to travel “to the land that I will show you.” Seven times God promises Abraham the land, yet he has to haggle with the Hittites to buy one small plot in which to bury Sarah. Jacob and his family are forced into exile in Egypt. Genesis ends with the promise unfulfilled.

Then Exodus begins. God calls Moses to lead the Israelites back to freedom and the promised land. Now, we feel, the story is about to reach closure. But it doesn’t come. Instead, a journey that should have taken days lasts 40 years. In the final scene of Deuteronomy, we see Moses, still on the far side of the Jordan, granted only a distant vision of the land. Again, the natural ending is deferred.

The God of gods has given His Dvar of which we do know that He tells always the Truth. The Elohim does not tell lies. When looking at all the things He said and promised we can find lots of hope. It are not alone the three promises to Abraham, of children, a land, and an influence on humanity such that “through you all the families of the earth will be blessed.” We can find that there is a promise of some one and of some time. In scripture we find about the beginning but also, very importantly, about HaKetz. Though the ending may still being beyond the visible horizon and the Jewish story seeming to end as Moses’ life ended, with a glimpse of the land not yet reached, a future not yet realized. But still we can have the tikvah or hope.

From the old times we got to hear many stories and came to see how the elohim promised things and how they became a reality. For us God’s three promises to Abraham, of children, a land, and an influence on humanity such that “through you all the families of the earth will be blessed" is a very important one. In later years there was also the promise of a saviour who would be called Immanuel.  Many put their hope in that promised anointed of God, the Messiah who would bring salvation. About him we came to hear he would have given his life, being buried put also been taken out of the dead. Then after his resurrection he went back away but promised to return. In his death, resurrection and that return we got some further new hope. 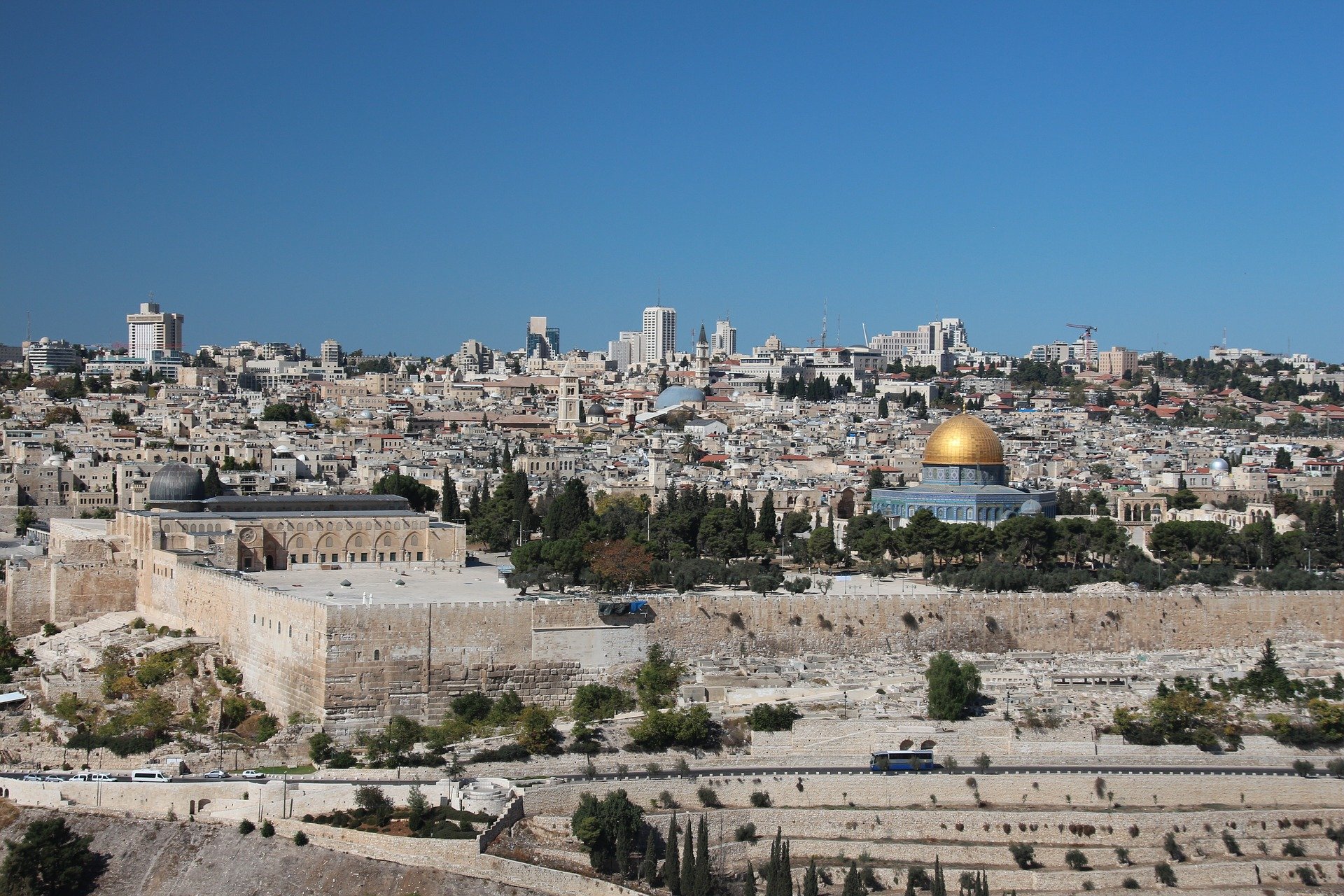 Not only the navi Jeshua but several neviim talked about the HaKetz or the End and the Ketz HaOlam, the end times. That Conclusion of time is again something to give us hope and to look forward to. Many spole about a time coming, which we could consider the end of our world system or system of things. So there is an ending, the end of the age, but it is always beyond the visible horizon.

For many Jews the Jewish story ends, as Moses’ life ended, with a glimpse of the land not yet reached, a future not yet realized. The same might be true for many of Jewish belief. According to Rabbi Jonathan Sacks

Judaism is the only civilization whose golden age is in the future: the messianic age, the age of peace when

“nation will not lift up sword against nation”

“the Lord shall be one and His name One.”

This ultimately was the dividing line between Judaism, Christianity and Christendom. In Christianity many saw that Jeshua was that promised man, the Messiah, and where willing to follow his teachings and look forward to the times he spoke about. In Christendom though, the majority made the Nazarene maser teacher into their god and took on Hellenistic teachings concerning their soul, believing there would be an other immaterial thing in their body which would go either straigt to heaven, purgatory or a furnace hell, after their death. For those Christians it looks like the sayings of Jesus his return  with his judgement and for some the second death does not exist.

For many Jews to reply to the question

“Has the messiah come?”

would be with the words

In the fine phrase of Harold Fisch, the Jewish narrative is

“the unappeased memory of a future still to be fulfilled.”

In Jeshuaism or Judaic Messianism we find Jewish believers who are convinced the Messiah has already come once, but shall return to the earth. As such they, like their other Jewish brethren, also look forward to that (2nd) coming of the Messiah at the end of times.

When looking at the set apart Scripture we can clearly see that the Jewish story is still unfinished. Throughout all the scrolls we read about the journey from multiple forms of slavery to what Levinas called “difficult freedom.” Torah is the template of responsible freedom, our constitution of liberty. At the moment we can know the beginning of our story but not the end. That is why, as the Most High Elohim is about to take the Israelites from slavery to freedom, God tells Moshe that His name is

Judaism, the religion of freedom, is faith in the future tense.

Western civilization is the product of two cultures: ancient Greece and ancient Israel. The Greeks believed in fate: the future is determined by the past. Jews believed in freedom: there is no “evil decree” that cannot be averted. The Greeks gave the world the concept of tragedy. Jews gave it the idea of hope. The whole of Judaism – though it would take a book to show it – is a set of laws and narratives designed to create in people, families, communities and a nation, habits that defeat despair. Judaism is the voice of hope in the conversation of mankind.

You should know that Judaism is a religion of details, but many miss the point if they do not sometimes step back and see the larger picture.

To be a Jew or to be a Jeshuaist is to be an agent of hope in a world serially threatened by despair. Every ritual, every mitzvah, every syllable of the Jewish story, every element of Jewish law, is a protest against escapism, resignation or the blind acceptance of fate. When you consider Judaism as a sustained struggle, the greatest ever known, against the world that is, in the name of the world that could be, should be, but is not yet, we can find the next step in Judaism, where the sent one from God, the Nazarene rebbe Jeshua (the Christ) provided a new opening to the narrow gate to a better future, where there is no place for worries, pain or wars.

There is no more challenging vocation. Throughout history, when human beings have sought hope they have found it in the Jewish story. Judaism and with it the next step of it, or Jeshuaism, is the religion, and Israel the home, of hope.