Vital importance of reading and following the Kitvei Hakodesh

In the first century there was a Nazarene man who said:

John 5:39 OJB  You search the Kitvei Hakodesh because you think in them you have Chayyei Olam. And those are the ones giving solemn edut about me.

People are called to read the Kitvei Hakodesh or Set apart Scriptures. It is in those scrolls or in the Bible, the Book of books, that people can find the infallible Word of God which brings the best advice to man. It is also in those writings that one can find edut or testimony of that son of man who is also called the Ben HaElohim (or son of God).

Though Jeshua told the people around him (Jehudi and goyim) to search or examine the Scriptures, the Jews spent their time following tradition, something we can also today with a lot of people who call themselves Christian. The Nazarene master teacher appealed to his heavenly Father’s written Word as being final and authoritative. In Jeshua his day the complete Bible was the inspired Mikra or Tanakh (the Hebrew Scriptures), from the first book of Moshe to the prophecy of Mal'aki (Malachi). When Jeshua wanted to explain something he always referred to those Sacred Writings and said:

Several times Jeshua stressed the vital importance of reading and following the Scriptures. 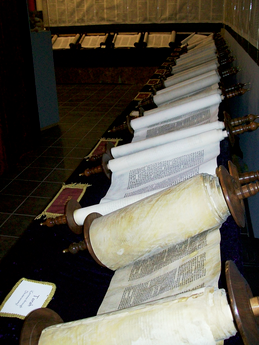 Matthew 22:29 OJB  And Rebbe, Melech HaMoshiach said in reply to them, You are in error, not having known the Kitvei Hakodesh or the gevurat Hashem (power of G-d).

Matthew 22:31-32 OJB  But concerning the Techiyas HaMesim, have you not read the thing spoken to you by Hashem, saying,  (32)  ANOCHI ELOHEI AVRAHAM ELOHEI YITZCHAK VEELOHEI YAAKOV (I am the G-d of Avraham, the G-d of Yitzchak, and the G-d of Yaakov, [SHEMOT 3:6])? Hashem is not the G-d of the Mesim (dead ones) but the G-d of the Chayyim (living).

Revelation 22:18 OJB  “I give solemn edut to everyone hearing the divrei haNevu'ah of this sefer: if anyone adds to them, Hashem will add to him the makkot (plagues) which are written in this sefer; [DEVARIM 4:2; 12:32; MISHLE 30:6]

The talmidim of Jeshua after they got instructed by their rabbi did not follow tradition any more. Like their master, they went by the written Dvar. Take, for example, Kepha (or Peter) who at the temple in Jerusalem quoted the writings of Moshe and referred to the navi

The prophet to listen at was one who was spoken of for several years and by many neviim. His name is Jeshua (Yeshua/Yehoshua/Yahushua/Jehoshua), today better known as Jesus Christ. It was that one who was raised by the Elohim as an example of what can happen to us too. Therefore we are doing well in paying attention to the Dvar HaElohim as to a lamp shining in a dark place. The Kitvei Hakodesh or Bible is this lamp, not tradition.

In later centuries there were people who said the Bible was the New Testament and many did not think to read the Old Testament. They forget that what the early Christians had of God’s written Word was complete — in the sense that they had all that was necessary for salvation.

Timotiyos (or Timothy) had read the Bible, or better said the Ketuvim or Ketoevim, the Hebrew Scriptures, from his youth. From infancy he knew the holy writings which were able to make him wise for salvation. The older works could shed enough light on the sent one from God so that he could find light and salvation through the faith in connection with Jeshua or Christ Jesus.

2 Timothy 3:15 OJB  And that from infancy you have known the Kitvei HaKodesh, which are able to make you chocham with a view to Yeshu'at Eloheynu through emunah in Rebbe, Melech HaMoshiach Yehoshua.

Today we have the Tanakh but also the additional writings we call the Kethuvim Bet or the Messianic writings with the gospels and letters written by the talmidim. Those additional writings tell us more about the life of the Nazarene rebbe Jeshua and show us that he is the Way to God. Having now more words to make everything clear, we have less excuse for not finding the way of life.

The more we search the Scriptures the clearer it becomes that God’s written Word completely equips the Christian.

It is clear that not everything Jeshua did is recorded in the writings of the apostles. There were many other things that Jeshua or Jesus did and many other words that he uttered that would not be put down in writing. There are at least two obvious reasons for this: (1) It would not be practical because of quantity to write down every word Jesus spoke and (2) it would not be necessary. As John explained that Jeshua performed many other signs also before the disciples which are not written down in his scroll. But we should know that those words which have been written down  are there for us so that we may believe that Jeshua (or Jesus) is the Christ the Ben HaElohim or Son of God, and that, because of believing, we may have life by means of his name.

John 20:30-31 OJB  Therefore, many other otot (miraculous signs) Rebbe, Melech HaMoshiach also did before the talmidim, which have not been written in this sefer.  (31)  But these things have been written that you might have emunah that Yehoshua is the Rebbe, Melech HaMoshiach, the Ben HaElohim, and that, believing with emunah, you may have Chayyim (Life) b'Shem of Him.

“believe that Jeshua or Jesus is the Christ”

and to gain everlasting life by means of his name —

“these have been written down.”

In fact, we are warned to be on guard against nonscriptural traditions. The apostle Paul warned us to be careful for what other humans tell us. We may not forget that we can be carried away by human teaching and philosophy. Do not forget that this may bring empty deception according to the tradition of men.

Colossians 2:8 OJB  Beware lest there be anyone of you taken captive through philosophical tevunah (wisdom) and empty deceit according to the kabbalah (oral tradition) of mere Bnei Adam, according to the ikkarim (basic principles) of the Olam Hazeh and not according to Moshiach;

The sent one from God, Jeshua the Christ was so thoroughly opposed to nonscriptural tradition that he would never allow his teachings to be carried down unrecorded. Jeshua asked the religious leaders of his day why it was they overstepped the mitzvot of the Adonai (commandments of God) because of their tradition. Then Jeshua explained the effect of this tradition:

Matthew 15:1-6 OJB  Then Perushim and Sofrim (rabbonim) from Yerushalayim approach Rebbe, Melech HaMoshiach, saying,  (2)  Why do your talmidim transgress the Masoret HaZekenim (the Tradition of the Elders)? For they do not do the netilat yadayim before meals.  (3)  But Rebbe, Melech HaMoshiach, in reply to them, said, Why [do] also you transgress the mitzvat Hashem for the sake of your own masoros?  (4)  For Hashem has said, KABED ES AVICHA VES IMMECHA (honor your father and your mother, SHEMOT 20:12; DEVARIM 5:16), and MKALEL AVIV VIMMO MOT YUMAT (the one cursing his father and mother to die he must die, SHEMOT 21:17; VAYIKRA 20:9).  (5)  But you say, Whoever says to his abba or his em, whatever support you might have had from me, [it is] a gift [i.e., korban, dedicated to G-d].  (6)  By no means does [anyone who says this] honor his abba or em. And you nullify the Dvar Hashem on account of your masoros.

Therefore let us not make the Dvar Hashem (or Word of God) invalid because of our tradition.

Since Jeshua warned against nonscriptural tradition, certainly he would not use such a method for handing down vital truths.

Let the Dvar Hashem given to us in the Kitvei Hakodesh or God’s written Word be a lamp to your feet and a light to your path. It will do the job completely, with no need for nonscriptural tradition, because all Scripture is inspired of God and beneficial for teaching, for reproving, for setting things straight, for disciplining in righteousness, that we as children of God may be fully competent, completely equipped or empowered to every good work.

2 Timothy 3:16-17 OJB  The entire Kitvei HaKodesh is Hashembreathed and useful for hora'ah (teaching), for reproof, for correction, for training in tzedek,  (17)  That the ish haElohim may be proficient, having been equipped for every one of the ma'asim mitzvot.