The devote Jew Saul of Tarsus after his conversion to the emunah in Jeshua was convinced that he, like the first talmidim of the rebbe, had to go into the world to tell about Jeshua and his heavenly Father. He at first also did not believe in Jeshua and now got to face his fellow Jehudiem who did not want to listen or want to come to see how Jeshua was the sent one from God to bring salvation as the anointed of God.

Reasoning from Scriptures Saul wanted the Jews to come to see haEmes or the truth. Though he, like the talmidim, saw that not all Jews were interested in what he had to tell. He was happy some began to believe, but was also confronted by the fact that others would not.

This response was no surprise to Paul, for it harmonized with Bible prophecy and followed a pattern with which he was familiar. (Acts 13:42-47; 18:5, 6; 19:8, 9) Hence, to his unreceptive departing guests, Paul knew and told people they had to be willing to hear. Like he at first did not understand Jeshua and his followers, saw that several Jehudiem could hear but by no means understand and, looking, they would look but by no means see. He also was aware of what impeded people to come to the truth.  For the heart of this people has grown unreceptive.

Acts 28:23-28 OJB  And they set a day for him, and they came to him in his lodgings, and there were many of them. And Rav Sha'ul was making a midrash, bearing solemn edut about the Malchut Hashem, and persuading them about Yehoshua from both the Torah of Moshe Rabbenu and from the Nevi'im, from haboker to haerev.  (24)  And some Yehudim were being persuaded by the things being said, but others had no emunah (faith).  (25)  And so they disagreed with one another. And as they were leaving, Rav Sha'ul said a final dvar. "Rightly the Ruach Hakodesh spoke through Yeshayah HaNavi to your Avot,  (26)  "Saying, ‘Go to this people and say, In hearing SHIMU SHAMO'A V'AL TAVINU UR'U RA'O V'AL TEDA'U ("You will hear and yet by no means understand and seeing you will see and yet by no means perceive.")  (27)  HASHMEN LEV HAAM HAZEH V'AZNAV HAKHBED V'ENAV HASHA PEN YIREH V'EINAV UV’AZNAV YISHMA ULEVAVO YAVIN VASHA V’RAFA LO ("For the heart of this people has become dull and with their ears they scarcely hear, and they have closed their eyes, lest they should see with their eyes, and with their ears may hear and with their heart they may have binah and they may turn and I will heal them. [TEHILLIM 119:70; YESHAYAH 6:9,10; also YESHAYAH 53:5]  (28)  "Therefore, let it be known to you that to the GOYIM (TEHILLIM 67:2) this Yeshu'at Eloheinu of Hashem was sent, and they will listen."

The original-language term rendered “unreceptive” indicates a heart that was “thickened,” or “fattened,” thus preventing the Kingdom message from penetrating it.

The Jehudiem rejected Jeshua as the Messiah because he did not fit their expectations having come to get rid of the Romans. What bothered also many Jews was that they saw themselves as Am kodesh unto Hashem Elohim (the chosen people of God), but heard those followers of Jeshua telling goyim (gentiles or non-Jews and and people of different nations) that this Messiah had also come for them and would bring peace also for them and an allowance to enter the Kingdom of God.

Also today we should be aware that the Netzarin Habrit hahadasha or Messianic writings and Tanakh do not oppose each other and do not bring the issue of Jew vs. Gentile, but believer vs. unbeliever. For Saul it came up to becoming a follower of the one sent from God who is the Way to God. Saul wanted not only his fellow brethren to be as a disciple of Jeshua (or being a follower of Jesus Christ). In Luke 9:23, Jeshua explained what was involved in following him as a disciple.

Luke 9:23 OJB  And Rebbe Melech HaMoshiach was saying to all, If anyone wishes to come after me, let him deny himself and lift up his etz shel hakarav atzmo yom yom and let him follow me.

Saul was called by Jeshua personally and therfore can be called an apostle of Jeshua. We can not be apostles of Jeshua and not direct disciples. But we can try to become like disciples of Christ. When wanting to come after Jeshua (Jesus Christ), the person has to deny himself, and follow Jeshua in his teachings and keeping to the same acts as Jesus would do'. In order to follow the sent one from God, rabbi Jeshua the (Jesus) Messiah, the person must be willing to renounce the self-life, which is produced by one's own sufficiency. Then, that person must agree that such a self-produced life deserves to be judged and separated from God. Finally, everything that is needed for godly living must be found by pursuing a growing relationship with the Lord Jesus Christ. With a new covenant living one has to have "the Spirit-filled life." "Being filled with the Power of Ruach Elohim one can receive a trunk full of knowledge to share with others.

Having received the Helper Ruach at pentecost the apostles got the power to go out and preach the gospel or Good News. Already in the first weeks they got a lot of converts to their faith and with the massive dispersion of believers throughout the great regions, The Word spread quickly – so much so that other cities began to hear the astounding news of the Gospel. Luke tells us that followers of Jeshua traveled from Jerusalem as far as Phoenicia, and Cyprus, and other cities telling the story to an ever-widening audience – with extraordinary results.

Acts 11:21 OJB  The hand of Adonoi was on them and a large number, having had emunah, turned to Moshiach Adoneinu.

Also today it is important that Jews believing in Jeshua, like Saul and the other apostles, talk with others and show them how Jeshua is the way to God.

In the first century news of this awakening among the Gentiles reached the apostles in Jerusalem and they saw the grace of the Elohim was glad. Our hearts today would also be glad if we could see how more people want tolisten to the Good News of the coming Kingdom of God.. As followers of Jeshua or Jeshuaists we not only keep our teaching to our own members but also do hope our exhortation will be heard by non-Jews so that they too with purpose of heart would cleave unto the Most High Elohim Hashem Jehovah.

Acts 11:23 OJB  Who, having come, and having seen the Chen v'Chesed Hashem, rejoiced and was encouraging everyone with deveykus (devotion) to HaAdon to remain true to Rebbe, Melech HaMoshiach Adoneinu.

In the first century of this common era there was an empowered activity happening in the lives of the God-fearing Gentiles. It was the grace of God – enabling them to be who God created them to be, and to do what He called them to do. today it may look that there are no gentiles or people from the nations are interested in the Dvar Hashem. But the Dvar HaElohim is not death. We have to hear it and we have to let others hear it as well. We may not keep it to our own people alone, because it belongs to all who are created in tzelem Elohim (the image of the Elohim).

In the progress of the Gospel it was important that the Jehudi also reached to the goyim. This is also as important as then in the times of the first Christians. Early Christianity would not have been possible without the Jews. As chosen ones by god the Jews have to "to put in joint, to complete." In his original creation man's will was intended to register the Will of God, to say Yes to it, and to pass the divine impulses and commandments to the rest of our being. Jeshuaists, like Jeshua want to put their own will aside to do the Will of God and showing others what that Will might be and what for Plan God has with this world.

Jeshua his attitude throughout his earthly life was to do the Will of God. He said:

"My meat is to do the will of Him that sent Me";

"I seek not My own will, but the will of Him that sent Me";

"Nevertheless, not as I will, but as Thou wilt."

But in the Fall, the dominance of Ratzon HaElohim (God's Will) and the loyal response of man's became disorganised; and the human will instead of functioning in harmony with the Will of God, began to obey the will of the flesh in its grosser or more refined forms. Not what God wills, but what "I" will, has become the working principle of the great majority. Thus it has come about that the will, by constant misuse, has become dislocated, warped, "out of joint." Tennyson says:

"Our wills are ours to make them Thine!"

Just so, but they are too stubborn for some of us to manage. Hence the suggestion that we should pass the matter over to the

"God of Peace, who brought again from the dead our master Jeshua (Lord Jesus)."

We are in the Body of Christ by redeeming grace, but we need to be set, i.e., to be brought into articulated union with the Will of God in Jeshua the Kristos (Christ Jesus). That union with Christ, with God and with each other has to be made strong and has to grow. By preaching we have to attract others and bring them to emunah.

Like many in the 1° century benefited from Saul’s fine example, we too have to put up a nice example and our affairs should also turn out for the advancement of the good news. Today we also should not be be afraid like most brothers and sisters in Christ of the first century felt confidence by reason of Saul's prison bonds, were showing all the more courage to speak Dvar HaElohim fearlessly.

Philippians 1:12-14 OJB  (12)  I want you to have da'as, Achim b'Moshiach, that the things concerning me have fallen out to an even greater advancement (1:25) of the Besuras HaGeulah [2Ti 2:9].  (13)  So that my sharsherot (chains--1:7) have become a hisgalus (revelation) in Rebbe, Melech HaMoshiach! In all the imperial guard and the public at large!  (14)  And most of the Achim b'Adoneinu, having been strengthened in bitachon by my sharsherot (chains), are more readily willing to dare to fearlessly proclaim the Dvar Hashem.

Months after Jeshua died we could see that many followers of him got empowered to speak about him and to show the world how it needed him. From several religious and civil writings we can hear that those Jehudiem got other Jehudiem and goyim going for Jeshua. They had to work for it, but they did it with joy.

Today, that same spirit has empowered the remaining ones of Christ’s brothers, along with their companions of the “other sheep,” to continue

Coming closer to the end times it becomes more important to come to the knowledge of the full truth and to unite under the shepherd Christ.

John 10:16 OJB  And another tzon I have which is not of this mikhla (fold [enclosure]); those also it is necessary for me to bring, and my voice they will hear, and they will become eder echad with Ro'eh echad (One flock with one Shepherd). [YESHAYAH 56:8; YECHEZKEL 34:23; 37:24]

The one special shepherd is Jeshua and Jeshuaists are belonging to the ones under him, gathered and bounded as one flock. Let us be aware of the importance of witnessing and like the apostles testify the kingdom of God, and persuading goyim concerning Jeshua, both from the law of Moses and from the prophets, from morning till evening. 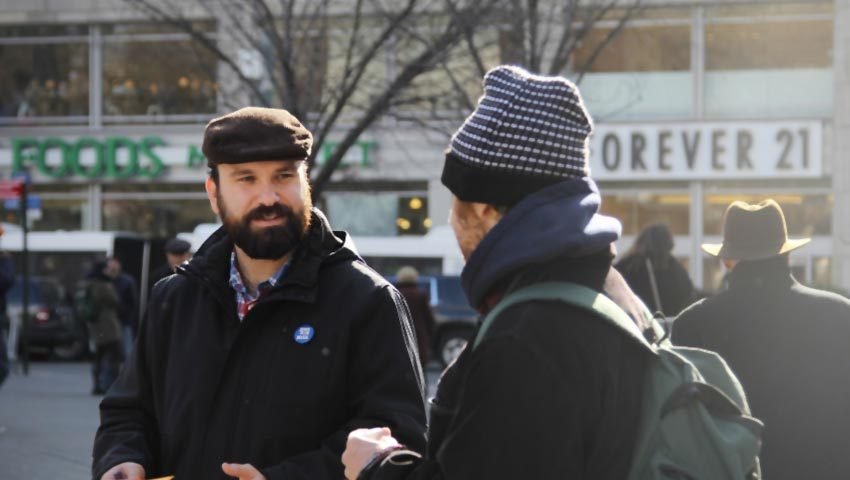